I’m sneaking off for vacation next week, so these are probably the last we’ll deploy until after I get back:

Many thanks to the ATC for doing the legwork to update the computer labs pages.

With today’s deployment we can celebrate putting more than 2000 pages into Drupal! Today we moved Child and Family Education. Be sure to check out their new and improved photo slideshows!

With the help of our first New Media Center students, we were able to take two more sites live today:

As part of the migration, we updated how you interact with the Art at Lane website. Through the use of Drupal’s Views Module, we changed how artwork is presented. Rather than have multiple pages to display the same information sorted in different ways, now you can simply click on a table header to sort by that column. And by having our own content type for artwork, we unified how pages are presented, and made it even easier to expand in the future.

We also officially finished our migration to Varnish. Based on some testing from yesterday, it looks like about 92% of our page requests are served from cache. Hopefully you’re noticing a much faster site!

Last Friday deployment until the end of summer!

I promised earlier that there’d be a follow-up post with new and interesting search data from our Google Mini. I’ll do my best to geek-out with as many stats as I can.

Google’s search statistics are given for for two types of data: queries and keywords. A query is the actual search performed on the search engine, for example “Labrador Puppy”. The keywords are (mostly) the words in the query. For my example we’d have two keywords, “Labrador” and “Puppy”. Some keywords, such as “the” or “and” we choose to ignore – no one is seriously searching for “the” on our website and expecting to find something meaningful.

Every Monday we collect data on the 100 most common queries and keywords from the previous week. After two months of collecting data, we’re have 190 keywords and 330 queries in our database. Let’s look at just the top 15 of each:

This graph is called a “Stacked Area Graph”, and it helps us to compare not only queries against each other, but also to see how queries change over time. So, in this chart, it appears that 6/2 was the busiest day on the search engine. In reality, because we’re only looking at the top 15 queries, we’re seeing some skewed data. If you look at all 300 of the queries we’re tracking, 6/2 was actually one of the slowest days.

So what can we learn? For one, we can learn what people are having trouble finding. The most popular search on our search engine has been for “soar”, and that it peaked last week – right before SOAR happened yesterday. This might be a hint that people were having trouble finding SOAR information without searching for it – a good indicator that maybe a more prominent link to SOAR should appear before the event.

We also see a few queries that should be combined. “map” and “campus map” is one example, “staff directory” and “directory” are another. We’re not combining them in our data right now because we want to see what people call things. For example, we can tell that more people are searching for “staff directory” than just “directory”, so it’s probably better to call our future staff directory (yes! this is coming!) a “Staff Directory” instead of just “Directory”.

We can also start to wonder why “library” was such a common query on 6/2, which is right around finals. If there’s often a lot of searches for the Library just before finals, we’d probably want to feature something on the Library on the homepage, to make it easier to find.

Keywords help us in different ways. Here we can see that our most popular keyword, “classes”, is actually used in searches more than any of our actual queries. So we know that many people are searching for classes, using a variety of queries. So we should probably investigate our analytics figure out where people are going after searching for classes. Then we can try to make those pages easier to find.

While there’s certainly improvements to make, most of this data is simply baseline information for after we finish revamping our information architecture. Then, as we implement our new Information Architecture, we should be able to see how that impacts our search traffic, to see if we’re providing a quantitatively better experience.

And to think, there’s thousands of data points inside the mini, and we’ve barely scratched the surface!

Two more sites are in Drupal as of this morning:

It’s fairly well accepted that it’s important to have a super fast webpage. We’ve spent much of the last two weeks working on our back end design to make the new Lane webpage as fast as it can possibly be. This blog post will be about sharing our results. A few notes before we begin:

In any testing, you need a baseline. Here’s the timeline for loading the contact page (remember to click on any image to see the full size): 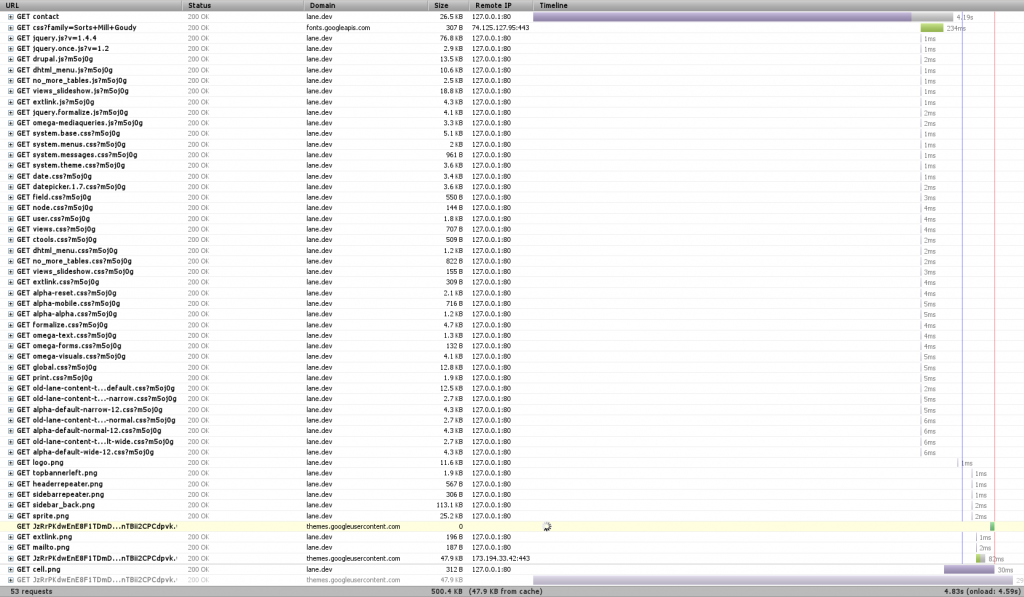 Right away we notice three things – first, that there’s a font that hasn’t finished loading, and which is highlighted in yellow toward the bottom. That’s actually an issue with Firebug, so we can just ignore it.

We also notice that there’s a TON of requests. In this case, 53 (technically 52, since we’re ignoring the font one). When we’re dealing with a local server like this, each of those requests happens super fast. But when we’re dealing with a remote server, like with 99.999% of web requests, there’s a limit of how many requests you can make at one time – always less than 10. So we can get a significant speed boost if we combine requests (You can see some of that limit at the bottom of this post).

Finally, we see a huge purple bar up at top. Any time you see purple in Firebug, that’s when we’re waiting on the server to do something. In this case, we can see that it took about 4 seconds for Drupal to render the page. Surely we can do better!

Our first step will be to combine CSS and Javascript files. We won’t see much of a difference on our tests (things might actually get worse!), but we’ll see a significant improvement on the actual site.

We’re down to 20 requests, just by telling Drupal to combine JavaScript and CSS files where it can. Eliminating 30 requests is actually a significant speedup (Sorry I can’t easily show it here, but you can see other research online).

Also worth noting is the file ‘sprite.png’ that’s listed on there. This is essentially the same idea, applied to images. You can look at our sprite here.

We’re going to skip over the next most obvious method of speeding things up and instead have a look at the Alternative PHP Cache (APC). Drupal is written in PHP, which is an interpreted language. That means that when we process the index.php file, we first turn it from normal PHP code to optcode, which is then run on the PHP virtual machine. APC lets us store (cache) optcode, so that we can skip that first, interpreting step.

The other night, we found that our server was actually freezing on some requests. We had a look at the apc cache, and we found something like this: 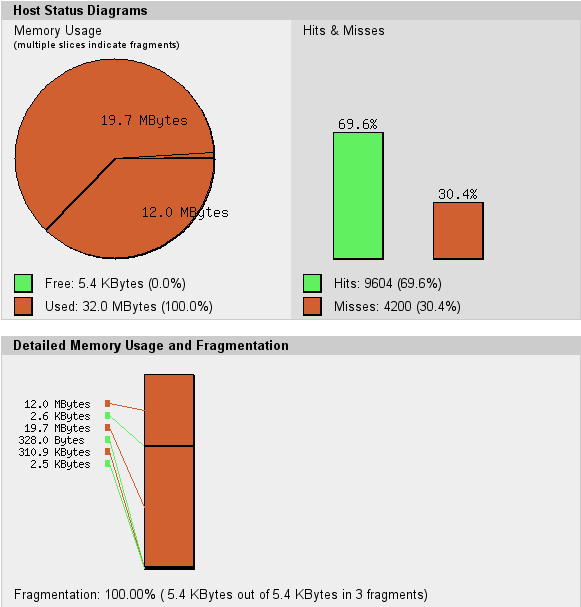 The circle is all red – there’s no more free memory available for APC to use to cache optcode. Our memory is also fragmented – APC can’t keep things near each other, which is going to make the cache work harder than it should. Together, these two things make us ‘miss’ the cache – on my computer, there were 4200 opportunities to speed things up that we missed. So we simply increased the cache size.

Now we’re loading the entire page in 640ms, and it’s only taking Drupal 277ms to get us the page content – less than 1% of the time it took before.

The other place to do caching is our database. Some types of requests to the database are really simple, repetitive things that could easily be stored in memory instead of on disk. MySQL provides a query cache where it learns what those things are. By default, this cache is turned off. If we turn it back on:

So we’re pretty quick. But, being programmers, we’re never satisfied. On our actual server we’re also:

Here’s the timeline from the actual server to my computer, as it is right now:

But there’s one more big thing we can do.

When Drupal renders a page, it needs to fetch information from the database, process a bunch of templates, check user permissions on a ton of objects, and then build the page. Then Apache, our web server, needs to serve that page to you. Apache is a good web server, but it’s a general purpose web server, designed to serve many different languages. There are faster alternatives.

We currently have a server in testing which is designed from the ground up to serve pages as fast as it possible. Pages loaded from that look like this:

Our Varnish server is an entire separate server that sites between you and Drupal and does nothing but determine what pages could be stored in RAM as complete pages, ready and waiting for when you want them. In this case, it was able to return the contact page to me in 2ms – most of the rest of the time was spent waiting for other resources – CSS, Javascript, and fonts – to load. Now it’s obvious why reducing the number of HTTP requests would speed up our page  load – those bottom requests would be made sooner.

Varnish posed a special problem for us these last two months while we were testing it. First, it doesn’t do encrypted traffic. For that we have a separate nginx server, which takes care of passing your encrypted requests straight to Drupal. But our second, more fun problem was figuring out how to load test Varnish. My laptop wasn’t strong enough, then our other web server wasn’t strong enough, and then a set of 5 other machines on the same network weren’t strong enough. Varnish was able to handle thousands of requests per second, and not even blink.

Thanks for sticking with me this long! Except a much faster web site before the end of the month, as we finally turn on Varnish for the rest of the world. And we know there’s still work to be done. Our next design should feature fewer requests and less JavaScript, letting your page load and render just a little bit faster.

We deployed just one site today: Career and Employment Services. But with that deployment we are officially at 50% of pages processed. Of the 13,000 pages that we had to work through this year, we’ve either migrated, cut, or archived half of them.Have a good weekend!