Yes. It turns out google is better at recognizing some formats as phone numbers than others. That post tested ten different formats, and found that the one we use and the one iFactory used are the ones best recognized by Google. The double dot notation? To quote the linked blog: “The phone number format you should avoid at all costs is #3: [###.###.###].”

Of course, that doesn’t settle which of those two is best. So I checked to see if there are any accessibility considerations with phone numbers. There are, but they don’t relate to visible format. All phone number formats are terrible, and something like (541) 463-3000 would probably be read to a blind person as “five hundred forty-one [pause] four hundred sixty-three three thousand”. There’s a fix for that, using aria-label on a surrounding link, but that just adds something for my todo list, and doesn’t solve the debate here.

And that’s how I found myself at 10pm, doing a survey of college websites, to see how they format phone numbers:

This, for a variety of reasons, is not a scientific study. They’re just the first 50 colleges and universities that came to mind (and now you know I don’t follow college sports), and I didn’t check their style guide. I just looked at the first contact number I could find. As I said, not a scientific study. Just evidence of a person who’s too far down this rabbit hole to give up, far too late on a weeknight.
Of course, that left me with a clear winner. And I had to know why. From a blog post in 2006, I learned AP changed their preferred style, and Lane hasn’t kept up. A quick email to someone who owns a recent AP style guide verified it.
So we’ll probably go with 541-463-3000. The parenthetical format, (541) 463-3000, feels like it come from an age when area codes were mostly optional. And for many of us, me included, that’s no longer the case. Just please don’t use the dotted phone notation on your pages! 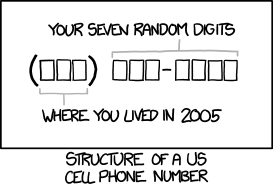