As promised in our initial goals post, a month as passed and now it’s time to check-in and see where we are on meeting our goals. As a review, those goals were:

Let’s take a look in order, along with some graphs. On each of these graphs, the straight line is the trend line – in order to keep on track for our goal, we need that line to be below the trend line. 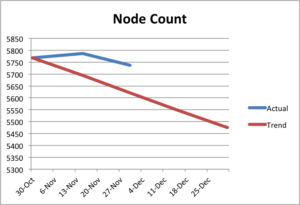 Clearly, we’re running behind – the count as of today is 5737, about 110 more than we’d hope to have. It turns out that removing pages is really hard. While we’ve removed some things to our archive, we’re fighting an uphill battle as things like news releases and meeting minutes get added. 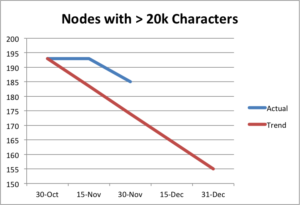 We’re making progress on this one, but again, it turns out to be really hard. We have 185 nodes with more than 20,000 characters, but we were looking to only have 174 this week. Many of the pages that are really long are actually Board Minutes, which we don’t delete and can’t shorten. Right now we’re optimistic we’ll still find enough pages to fix, but this will be hard. 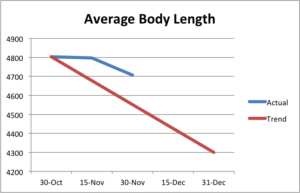 Although we’ve managed to improve from 4803 characters to 4706, we’re still 150 characters over where we wanted to be. Again, it turns out the board minutes are in large part to blame. But we’re still optimistic.

Improve the average age of our pages by 6 months, from roughly 24 months old to 18 months old. 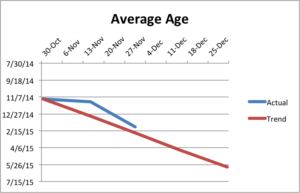 When tackling this goal, we had a separate subgoal to reduce the number of pages we have that have gone more than four years without an edit. Lori’s done a lot of work on this list, reducing the number of pages on it from 732 to 612, which makes a pretty impressive graph: 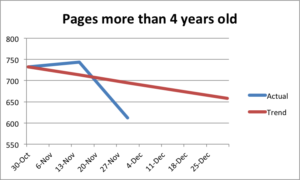 Surprisingly, despite all that effort on our very oldest nodes, it wasn’t enough. But we have a month to go, so there’s still some time. We’ll check in again on January 1st!