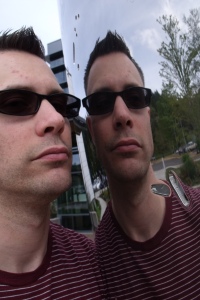 I decided to team up with a classmate for our final project.  After watching his last video, I was quite impressed with the quality of it and his knowledge of maintaining continuity and proper lighting.  Though younger than myself, Alden Elias has years of experience with filming, lighting, and editing.  It was awesome to work with him and though at times it was difficult to keep up, I feel that it was an invaluable experience which I learned a great deal from.  I am brand new to the Multimedia Design field and lack much of the basic knowledge needed to develop and produce quality video and film.  Alden showed me some basic tips for shooting video on my new Canon T5 and also introduced me to lighting equipment.  He had some great insight to share when it comes to good shot framing, and completely blew me away with his mastery of Final Cut Pro.  Alden films many skate videos and is involved in a small, local production company (https://www.youtube.com/user/Damageproductions25).

We thought we would switch it up for our final project and go for something other than funny.  Initially the idea was to create a meaningful message for the viewer to ponder but this idea became lost as the focus shifted more to creating powerful, visual images instead.  We flexed our artistic sides, traveling around Eugene to various locations such as Skinners Butte, the Ruth Bascom Bike Path, Franklin City Park, and others.  We did some pre-planning for the house scene by creating a storyboard, but all of our outdoor time-lapse shots we did on the fly.  We knew we wanted to get some visually compelling shots and had a few ideas of where to go, which was all we needed really.  Alden did have some previously shot footage that came in handy here and there, but most of it was all new.

The video doesn’t tell a story, however it leaves much to the imagination of the viewer which is unique.  Different stories and ideas will sprout from each person that watches it.  Maybe it will inspire them.  Perhaps they will relate to it in some way.  It could possibly challenge them to try filming something similar with their own unique twist.  I know every time I’ve seen the time-lapse on video I wondered how they did it.  This video was challenging, and an absolute blast to be a part of.  I plan on shooting some more random footage of my own and learning how to mask it, and change speeds on my own editing software, Premiere Pro.  My biggest realization during this project was the never ending list of infinite possibilities and variations at my creative disposal.  I’d like to thank Alden for his amazing contributions to the project, as well as his professional attitude and work ethic.

Also a big thanks to Yung H33M for allowing us to feature his music in our video!  Hear more at https://www.youtube.com/channel/UCvUzcAmvxszP5JGuF2R4Nhw

3 thoughts on “Dreams and the Time-lapse”