On Friday, February 21, we headed out on an art field trip. Students met on campus and then we carpooled to the Jordan Schnitzer Museum of Art at the University of Oregon. 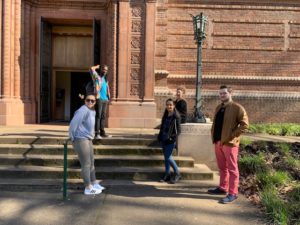 Meeting in front of the museum.

The museum had several excellent exhibits, including “By Looking Back, We Look Forward,” by Roger Shimomura and “The Usual Suspects” by Carrie Mae Weems. 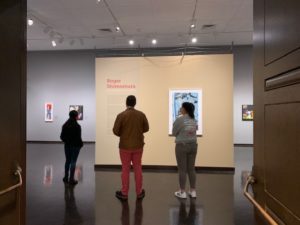 After spending time at the museum, we went to Noisette Bakery to see an exhibit by Honors Librarian Claire Dannenbaum. 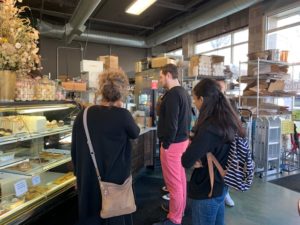 Claire joined us for the field trip. While we ate, she shared information about her work and answered questions. 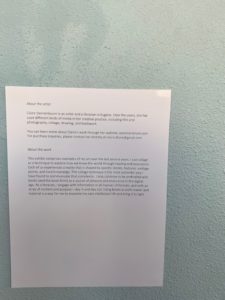 The Honors Leadership Team (HLT) finalized its charter last year, and the charter states that we would add one or two student members to the team by fall 2013. While everyone on the team supported this addition, the addition itself proved to be slightly difficult. We began the academic year without a current student on the team, so I am very appreciative of the synchronous events that led to our adding our first student member at the start of winter term 2014.

Cheyne Dandurand took the honors Invitation to Inquiry seminar last year, and he approached me about being a peer mentor in the class this year. He said that he had a positive experience in the class and felt that he could both contribute to this year’s seminar and also gain something himself by participating again.

I team-teach this seminar with my colleague, Katie Morrison-Graham. Katie and I both thought that having Cheyne join the class as a peer mentor was an excellent idea. We also encouraged him to talk to Tamara Pinkas. Tamara is the Cooperative Education Coordinator for Lane’s Advanced Technology and Language, Literature and Communications Divisions. She also oversees the honors experiential learning requirement and teaches the honors cooperative education class. Katie and I recognized that being a peer mentor would be a good form of experiential learning, and we thought that Cheyne could get co-op credit for his work.

Tamara, however, saw the larger picture and recommended that Cheyne have his co-op work involve the entire Honors Program rather than just one honors class. She suggested that he join the leadership team and come up with other ways to both learn more about the program and contribute to it.

Cheyne decided that he would not only join the HLT and be a peer mentor in the Inquiry seminar. He would also assist with our social media, organize social events for the honors students, and help plan other honors events.

Last week, Cheyne attended the first HLT meeting of the term. We still need to determine the best way to find student members in the future. Fortunately, HLT member and math instructor Jessica Knoch, is working on a process for the team to consider, and I’m confident that we’ll have a plan in place soon. In the meantime, we now have a current student’s perspective informing our discussions, plans, and projects – a perspective that is very much valued by those of us working on the Lane Honors Program.