What an event! The students presented their research findings in two sessions separated by a short break. The first group — Sam, Hayden, Holly, Emma, and Paige — addressed morality legislation in a panel discussion. They described their methodology, used women’s reproductive rights as their primary case study, and then elaborated on how the methodology could be applied to thinking critically about other moral issues that have been, or continue to be, legislated. 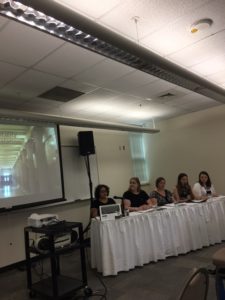 The second group, Jack and Gus, opened with a cover of Lady Gaga’s song, “Til It Happens to You,” performed by Jack. 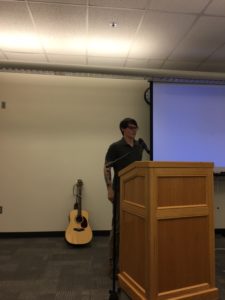 Jack just after finishing his song.

This performance was followed by Gus reading his paper and sharing slides describing many facts and statistics on alcohol education at universities and its potential impact on reducing sexual assaults. 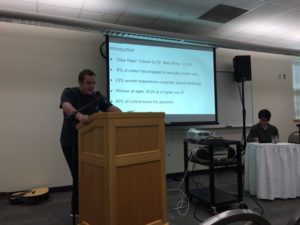 The students also created a research poster, brochure, and website. I will post links to them once their are available.

I have no doubt that these students will continue to pursue research interests during their time at Lane and at their transfer institutions. I hope they will also decide to pursue graduate degrees given their intellects, research skills, and passion for learning.