Yesterday, the Honors Program played host to a special event: Sharon Schuman speaking about her book, Freedom and Dialogue in a Polarized World. 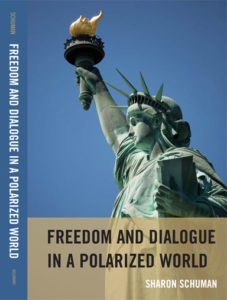 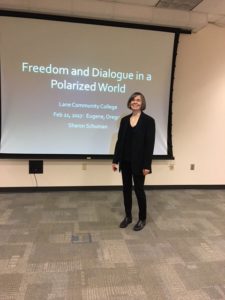 Schuman’s work is interdisciplinary and drew support from across the campus. The event was co-sponsored by the Library; the departments of Communication, English, and Philosophy; and Student Life and Leadership Development.

Schuman uses Mikhail Bakhtin’s work on the dialogic nature of language and extends it to the concept of freedom. She argues that freedom is also dialogic and that the more perspectives one can see from, the freer one will be. 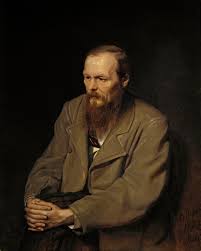 During the talk, Schuman used excerpts from great works of literature to illustrate her points, suggesting both that polarization is not new and that solutions are possible. Among the works she referenced was Homer’s Ancient Greek epic, Iliad.

The event was well-attended with approximately sixty people in the audience, including students, faculty, and staff as well as members of the community. 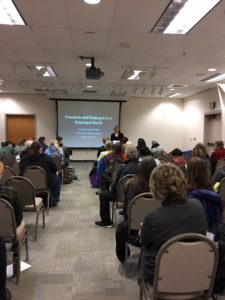 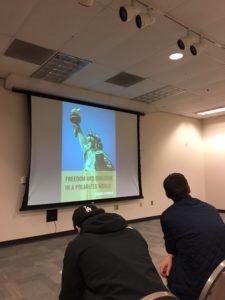 At the end of the event, we raffled off eight free copies of the book. One copy was for non-students and the remaining seven copies were for students. Everyone who received a copy stayed to have it signed and to talk with Schuman.

Sharon Schuman is updating her blog to add a post about this event. I’ll link to it once she has it up. More information about Schuman and her book can be found on her website, Dialogic Freedom.